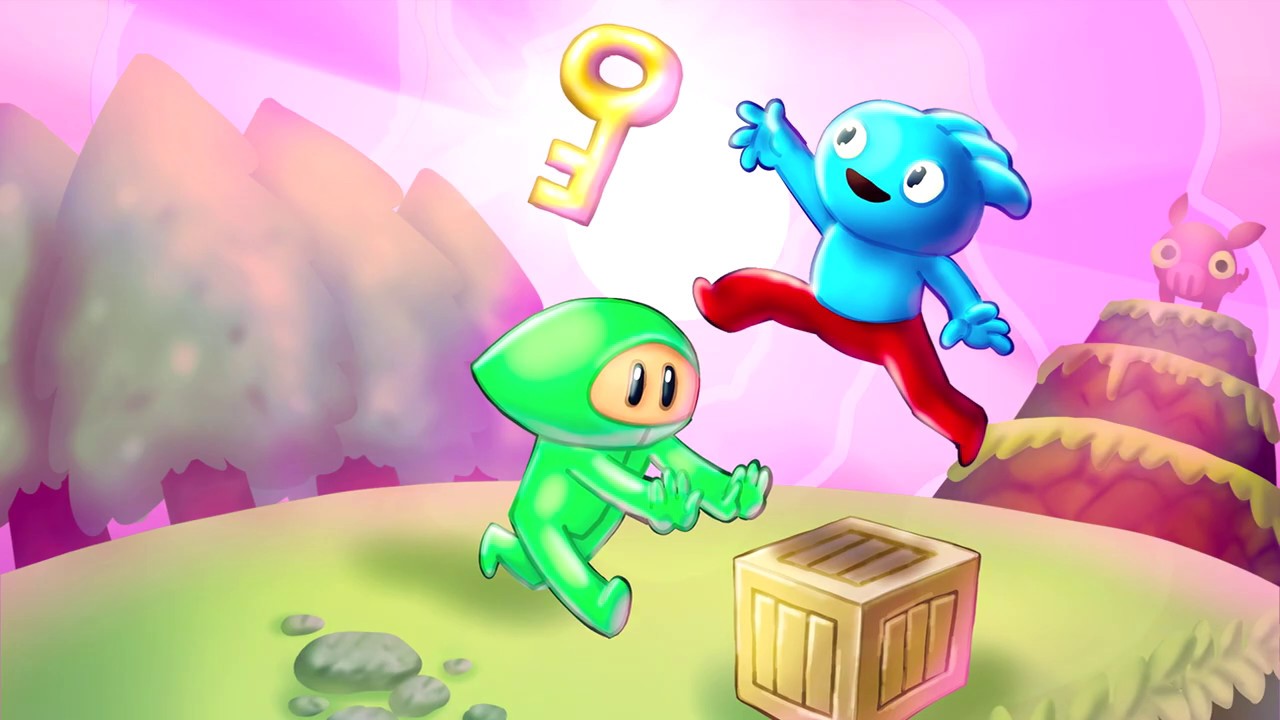 Never have I played such a unique 2d game before; and even though it’s a small demo, Toodee and Topdee has big potential to be a great game. Toodee and Topdee requires you to use your mind to solve its perspective-bending obstacle courses to save the universe and retrieve the magical semicolon, the cosmic object created by a God known as Aleph which was stolen by his traitorous wingman, TOODOO.
Toodee and Topdee mixes 2D platforming and top-down puzzle solving seamlessly together in its brain buster puzzles with eight worlds filled with high IQ challenges and boss fights.

There is a little bit of interesting history about this game. It was actually developed 2 years ago for a famous indie game jam called “Ludum Dare,” a long-running online contest where indie game devs make games in no more than 72 hours with a certain theme to keep in mind. The theme for Ludum Dare 41, the iteration that Toodee and Topdee was a part of, was “Combine two incompatible genres.” The result? Toodee and Topdee was born and it takes the “in” out of “incompatible”. Now after 2 years, the small-time jam project is now becoming a fully-fledged Indie title and is hitting Steam later this year. The developer, dietzribi, has made some very interesting and very out there games in the past and this will be their first full release on the major game distribution platform. This game is not being talked about right now and it’s honestly very strange. A game like this, that is super innovative and actually pushes the boundaries of what we know as modern game design, even in something like the indie game scene where innovation and new ideas are sprung. With critical acclaims like FEZ and Lethal League, you’d think more people in the indie scene would pick up on this before its later release in the year. in due time, maybe it won’t go under the radar at launch and I hope not because it truly is a unique and bodacious experience.

In Toodee and Topdee you play as, well… Toodee and Topdee. The former being a kid-looking Osmosis Jones who traverses in a traditional 2D  platformer environment, jumping on platforms and death spikes/enemies. The latter is a top-down green suit entity with Bomberman eyes who picks up boxes to go over small pits and avoids tracking enemies/hazards. Now, these two can’t interact in each other’s different universes and must help each other out by tampering with their own respective game worlds to indirectly affect the others’. And this is where the real meat and potatoes lies in Toodee and Topdee; it’s creative and challenging gameplay. With the switch of a button, you hop between 2D platforming and top-down perspective, in which the character of the inactive view is frozen in time, allowing the character of the active view to utilize their surroundings and help the other player out.

For example, say Toodee is jumping in the air. If you switch perspective, Toodee will be paused in mid-air, allowing Topdee to put a box under Toodee and giving him another platform to jump on. And boy is there a lot of that in this demo. The level design really fleshes out the possibilities of what you can change between each perspective. In one puzzle, you have to get around enemy pigs to get to the next level. The pigs are too fast and abundant for Topdee to traverse across the screen. So what you do to eliminate them is wait for them to get close to a spike hazard, switch to the platformer perspective and watch them pop like balloons! It’s clever game design that really is hard to experience unless you play it. It’s super satisfying intrinsically once you complete a level after numerous failed attempts. And this is just the demo. Who knows what the full game will be full of on release!

And what is a great game without a great-looking presentation? The game is vibrant with a light color palette and clean and detailed sprite work. Characters and settings are simple, yet highly detailed in 2D pixel art. This is especially true with Toodee as he stretches out a bit like a Disney character whenever he jumps and his hair frolicking whenever he moves. Same thing with the backgrounds which are coated in these pixelated paintings that are simple and effective. All the characters are designed in a cartoon style resembling that of a 2D PIXAR film, giving them a soft and cute feel that makes them fun to control!  What’s really cool is the perspective change of each level when switching ties into the gameplay. Water canals that Toodee can swim in the 2D platforming perspective become empty sinks where Topdee can pick up boxes and place them to avoid hazards. The visuals really help complement the gameplay and it makes you feel like you’re interacting with the world Toodee and Topdee inhabit.

There are some things however that do slow the pace of the gameplay down. Collision when going through the portals to end the obstacles could be bigger and the design of some levels leaves Toodee and Topdee far away from each other after figuring out a puzzle, making the game a bit slow in terms of running through it as fast as possible. Levels are also generally short and don’t have much in the ways of scrolling down to solve a long and more complicated puzzle which makes it feel that there should be more, but there isn’t.

All in all, though, Toodee and Topdee shows great promise and I can’t wait for the full release later this year! Games like this can only be experienced once played and I highly recommend everybody and anybody to check out this bombastic game out when it launches on Steam! You can even play the Demo on Steam right now. It has over five levels of engaging puzzle solving action that is sure to trip up even the most veteran of puzzle pros. It’ll give you a nice change of perspective when it comes to 2D games!